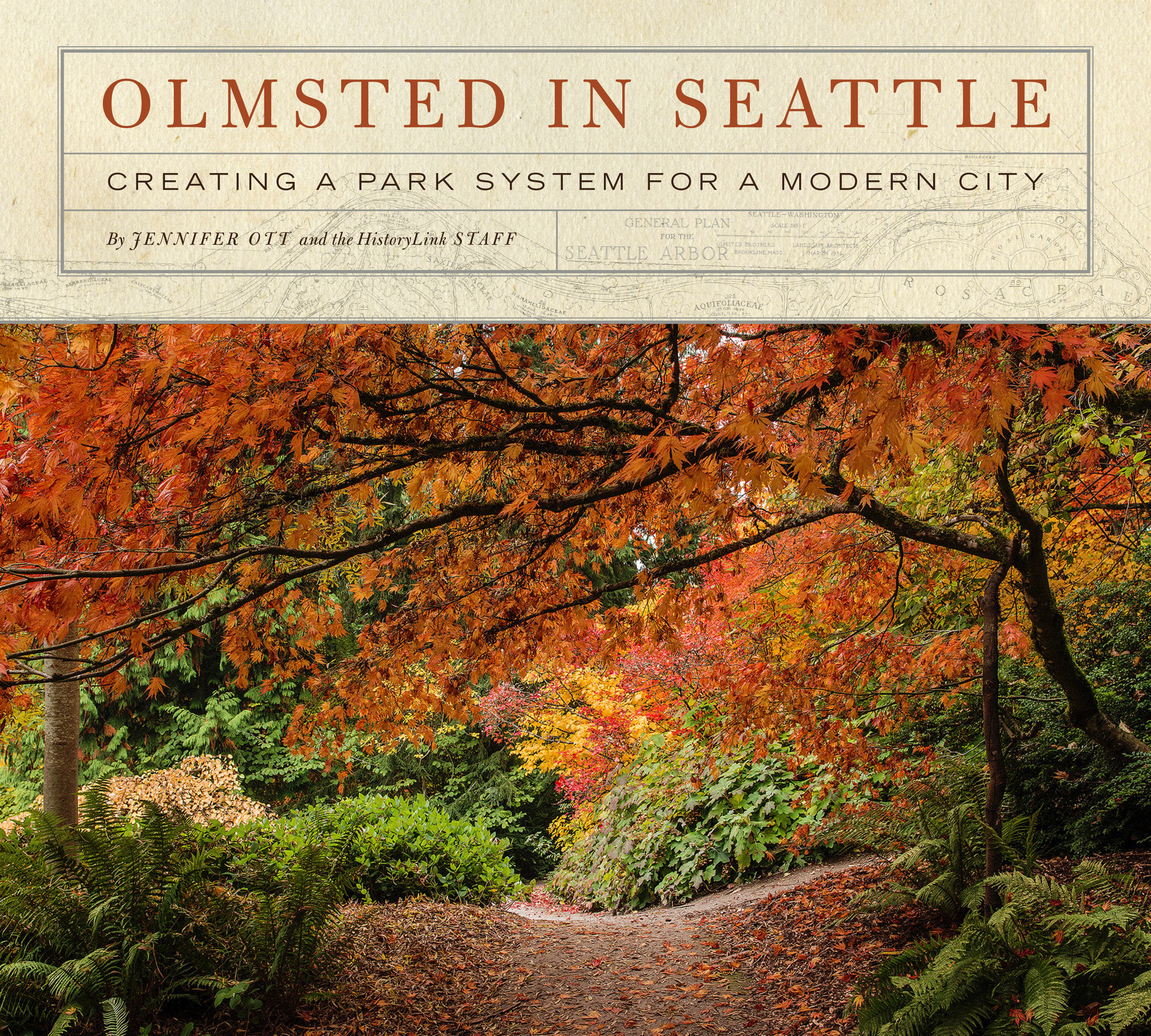 Olmsted in Seattle: Creating a Park System for a Modern City

In the midst of galloping growth at the turn of the twentieth century, Seattle’s city leaders seized on the confluence of a roaring economy with the City Beautiful movement to hire the Olmsted Brothers landscape architecture firm to design a park and parkway system. Their 1903 plan led to a supplemental plan, a playground plan, numerous park and boulevard designs, changes to park system management, and a ripple effect, as the Olmsted Brothers were hired to design public and private landscapes throughout the region. The park system shaped Seattle’s character and continues to play a key role in the city’s livability today. 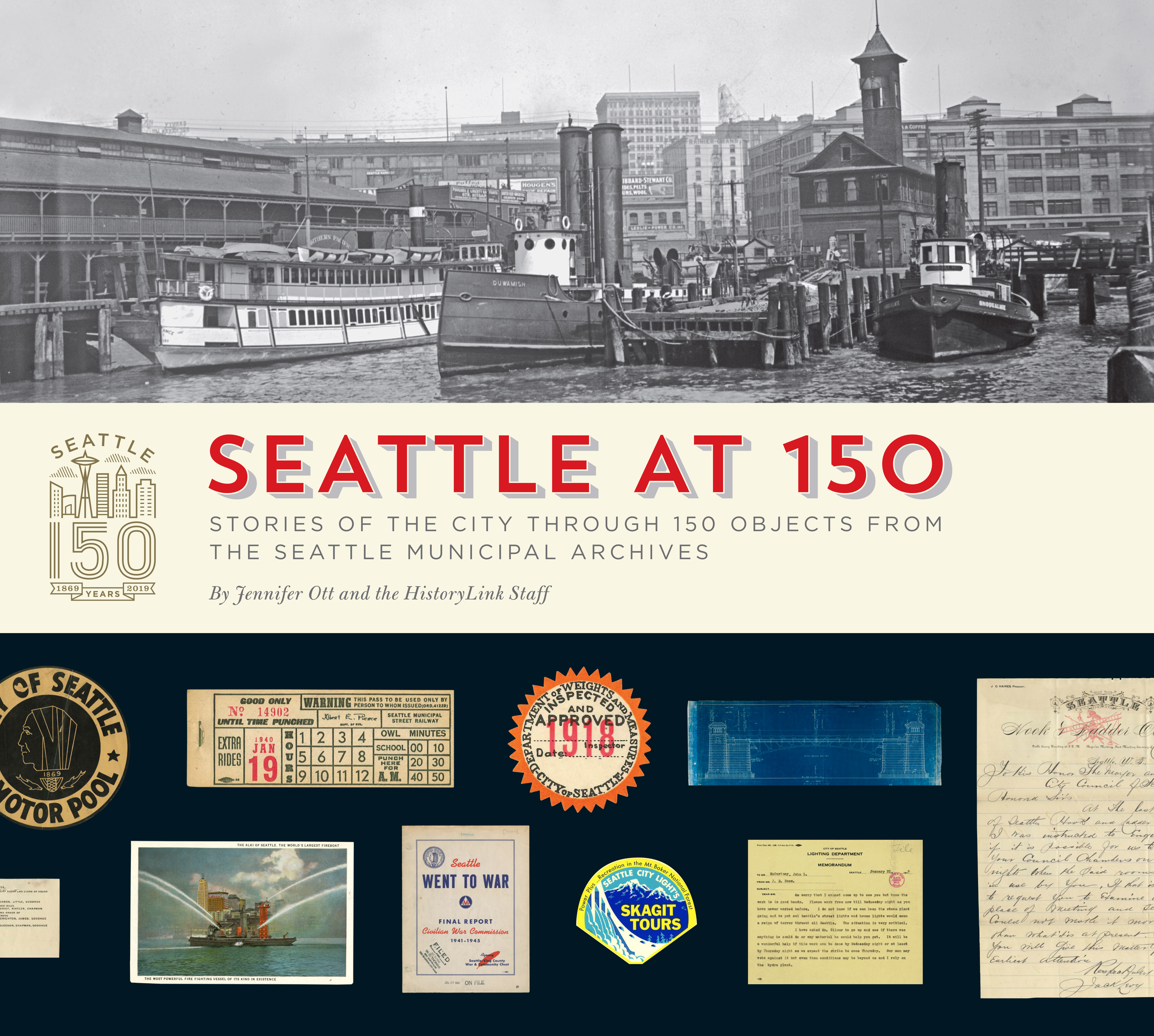 Seattle at 150: Stories of the City through 150 Objects from the Seattle Municipal Archives

Seattle has packed a lot of history into the 150 years since its incorporation. Much of that history—the stories, the people, dialogue and debate, conflict and vision—is preserved in the Seattle Municipal Archives. The collection’s documents, maps, photographs, and ephemera bear witness to the texture, color, and voices of an ever-growing and changing city.

The 150 artifacts highlighted in this book illustrate a transformed geography, developed and redeveloped neighborhoods, and waves of city-defining immigration and emigration. They show us how the city’s psyche and its physical and social landscape—its aspirations—were shaped. The steady push and pull of community organizers and civic leaders, and the everyday needs of the people who call this place home, give Seattle its remarkable spirit, just as they have since its first cornerstones were pounded into place on the shores of Elliott Bay. 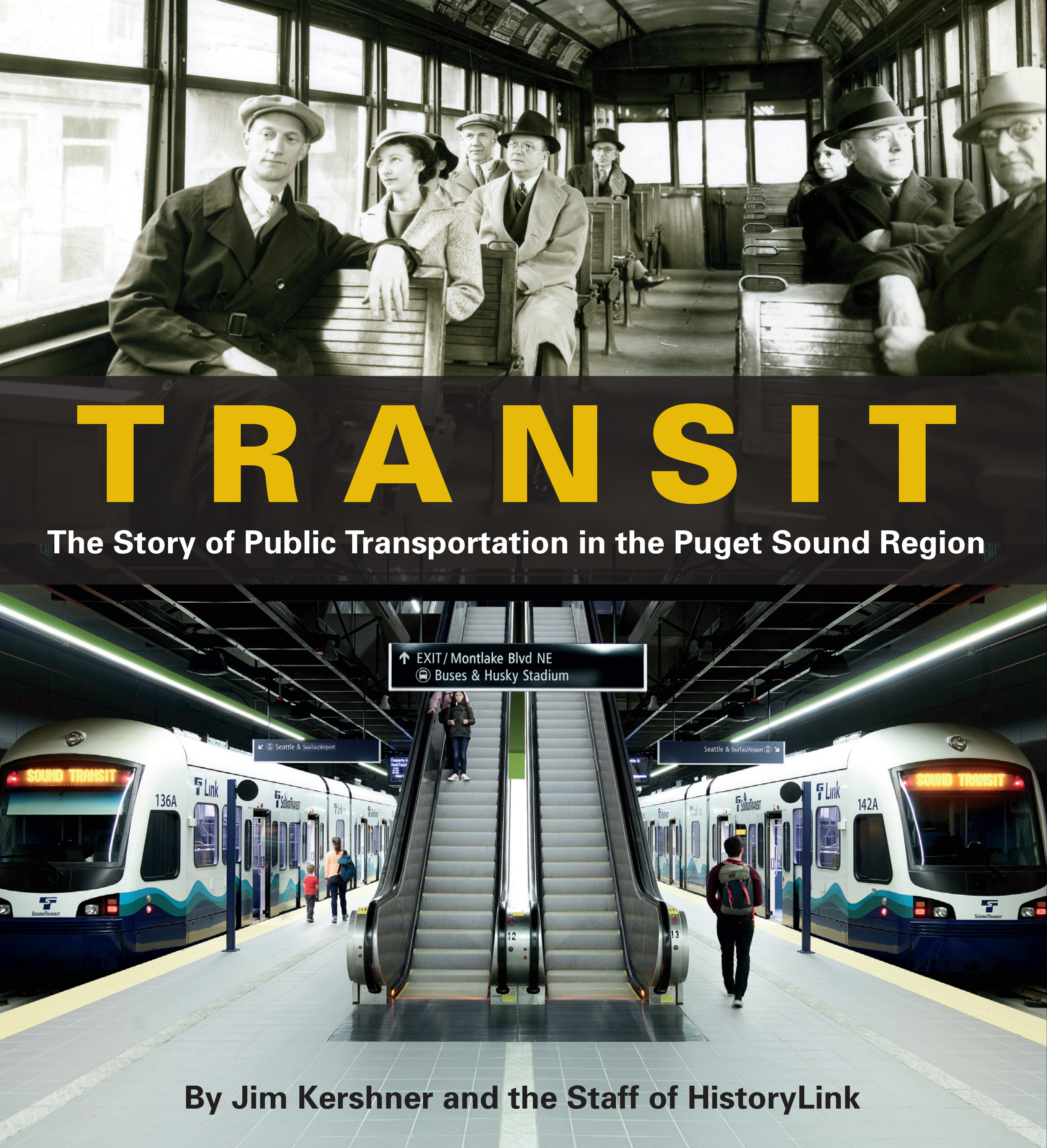 Transit: The Story of Public Transportation in the Puget Sound Region

Ever since the first streetcars rumbled through the streets of Seattle in 1884, public transportation in the Puget Sound region has been a wild roller-coaster ride, replete with scandals, triumphs, and momentous turning points. A complete rail transit system crisscrossed the region during the trolley days, only to be dismantled by 1941. After seventy years of turmoil—and traffic congestion—a new system, Sound Transit, arose in its place. The story is not just about trolleys, trains, and buses—it is also about the making and breaking of mayors and the way that Seattle, Tacoma, and Everett developed from the 1880s to today. 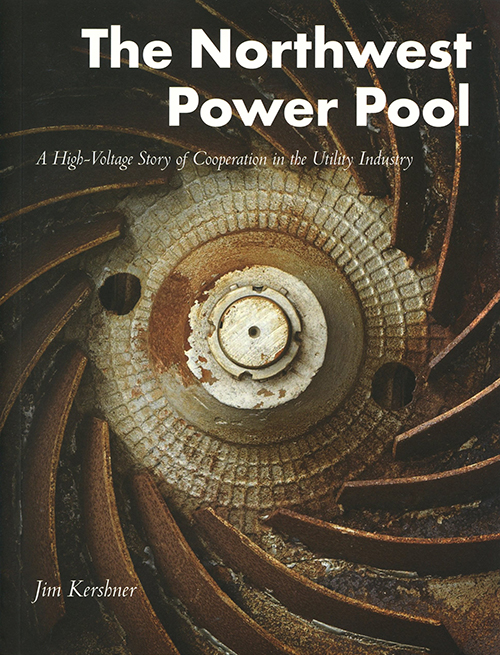 The Northwest Power Pool: A High-Voltage Story of Cooperation in the Utility Industry
By Jim Kershner

In the Pacific Northwest, home to the vast drainage area of the Columbia River and its tributaries, a consortium of utilities formed during World War II. Realizing the countless benefits of pooling resources, they continued post-war and have since expanded to include parts of Canada and California. Told by Jim Kershner, The Northwest Power Pool is a story of interconnection, cooperation, and coordination among this region's generating utilities. The Northwest Power Pool became famous for delivering huge amounts of reliable electricity to regional industries, and still today, it is growing and exploring new energy sources. 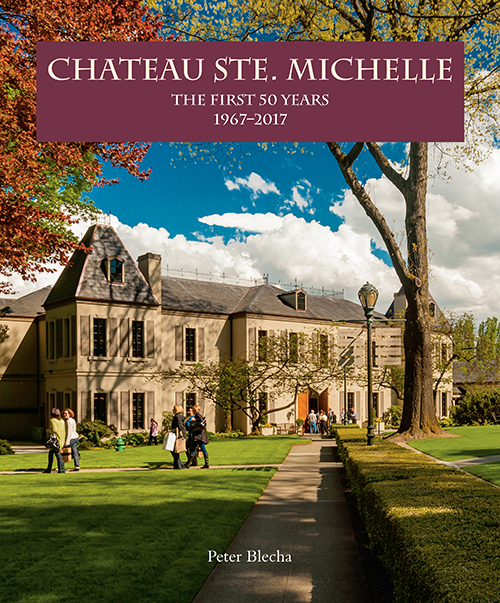 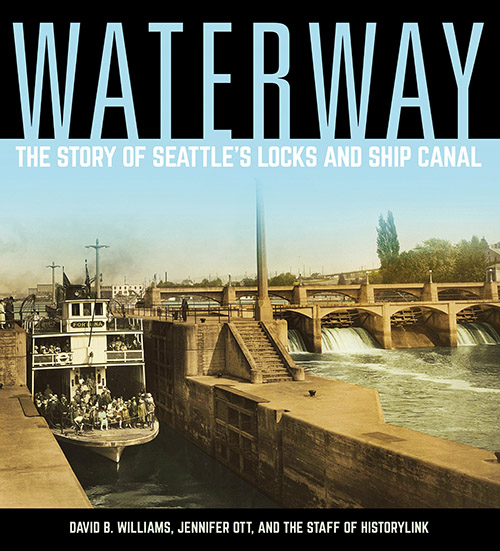 Waterway: The Story of Seattle's Locks and Ship Canal
By David Williams, Jennifer Ott, and the HistoryLink Staff

Why does a city surrounded by water need another waterway? Find out what drove Seattle's civic leaders to pursue the dream of a Lake Washington Ship Canal for more than sixty years and what role it has played in the region's development over the past century. Historians Jennifer Ott and David B. Williams, author of Too High and Too Steep: Reshaping Seattle's Topography, explore how industry, transportation, and the very character of the city and surrounding region developed in response to the economic and environmental changes brought by Seattle's canal and locks. 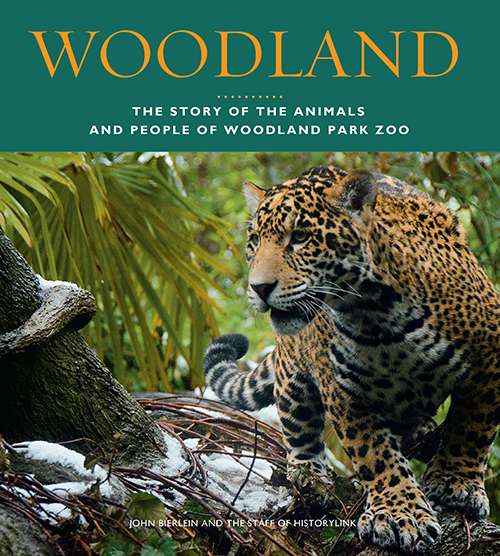 Woodland: The Story of the Animals and People of Woodland Park Zoo
By John Bierlein and the Staff of HistoryLink

Follow the history of Seattle’s Woodland Park Zoo, beginning in the nineteenth century. As the city grew, its zoo engendered civic pride and the animals in its growing collection became local personalities. By the 1970s, the zoo emerged as a pioneer in zoo design. Woodland provides a narrative of changing ideas about the relationship between humans and animals, with over 200 images old and new that help to tell the story of this zoo. 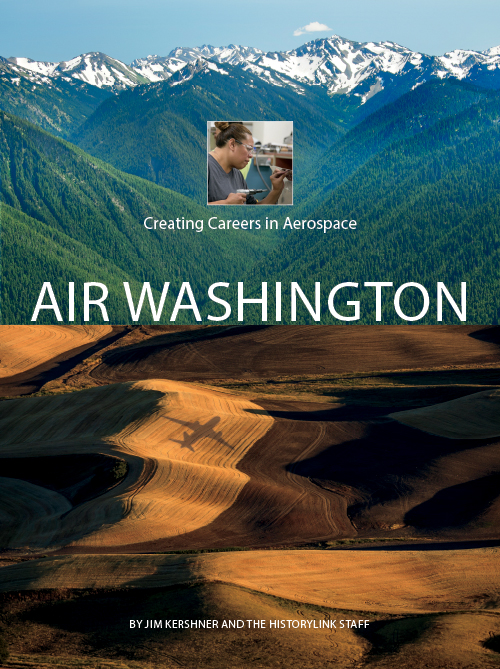 Air Washington: Creating Careers in Aerospace
By Jim Kershner and the HistoryLink Staff

The Air Washington consortium, made up of eleven colleges in Washington state, expanded their aerospace programs, bought new equipment, and hired more instructors. Further, they hired "navigators" to help students choose the right classes, mentor them during the program, and find career positions upon graduation. The schools, students, and businesses all benefitted from high graduation rates from certification programs. 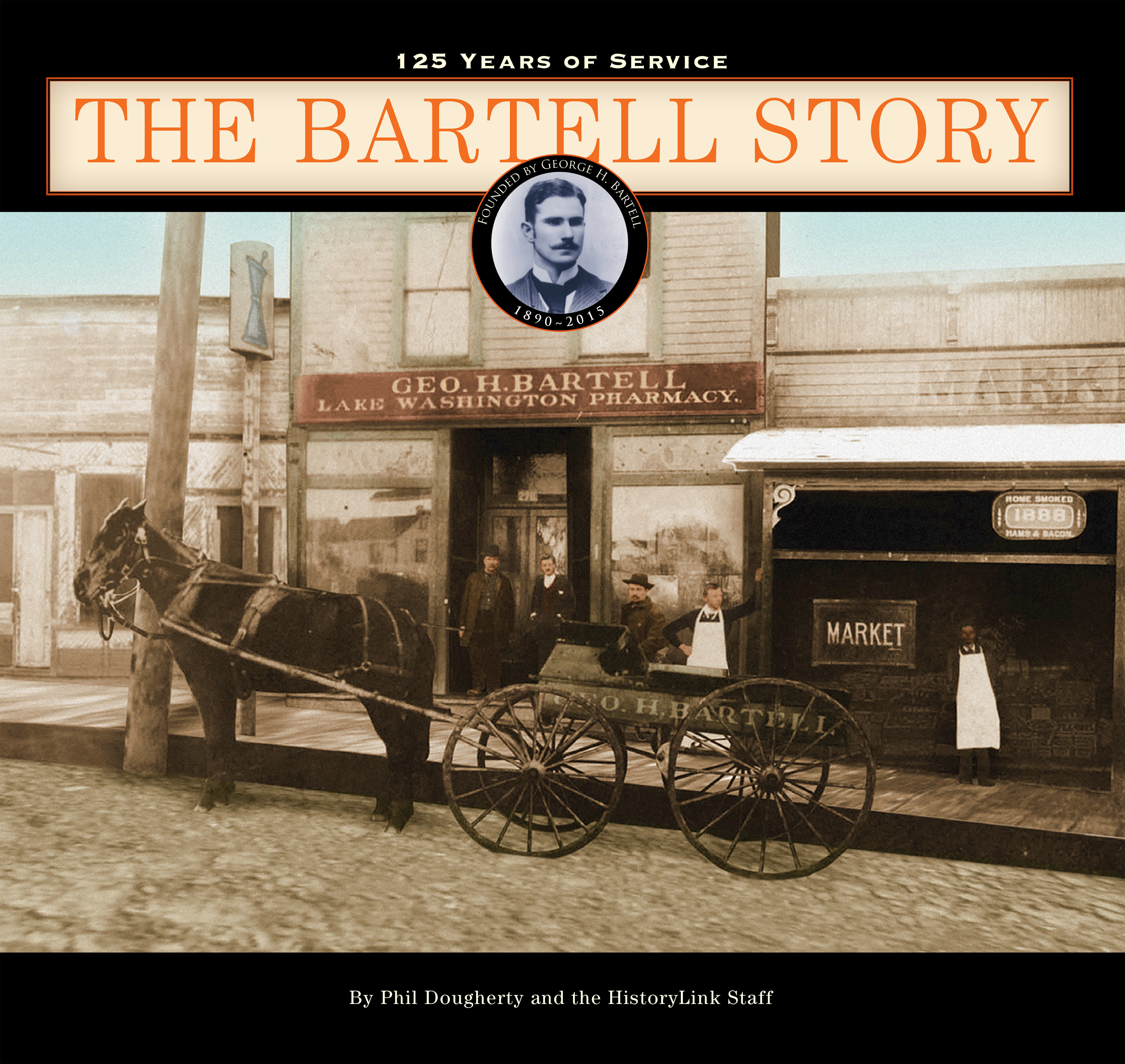 The Bartell Story: 125 Years of Service
By Phil Dougherty and the HistoryLink Staff

in its 125 years, Bartell's has grown from a small, one-store operation on Seattle's Jackson Street into a thriving company with dozens of locations in the Puget Sound region. Read how three generations of the Bartell family have committed themselves to insuring their stores make a difference to the communities where they operate through more than a century of challenge and change and boom and bust. 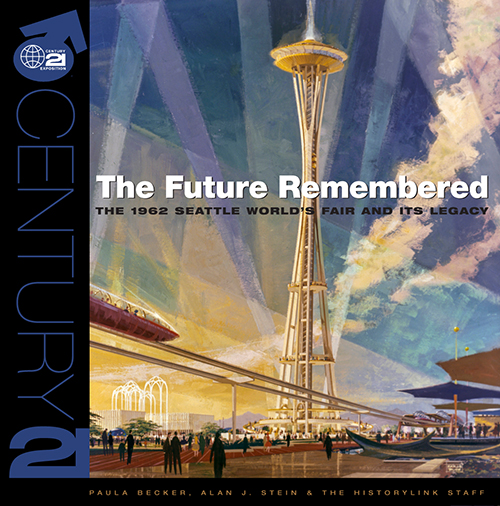 The Future Remembered: The 1962 Seattle World’s Fair and Its Legacy
By Paula Becker, Alan J. Stein & The HistoryLink Staff

Space Needle, science, skyrides, showgirls. The 1962 Seattle World’s Fair optimistically looked ahead to imagine what the future might hold. The Century 21 Exposition drew 10 million visitors, captured America on the cusp of a cultural revolution, and left behind the Seattle Center, the artistic and cultural hub of the city today. Details of America’s Space Age World’s Fair and its lasting legacy are captured in this book. 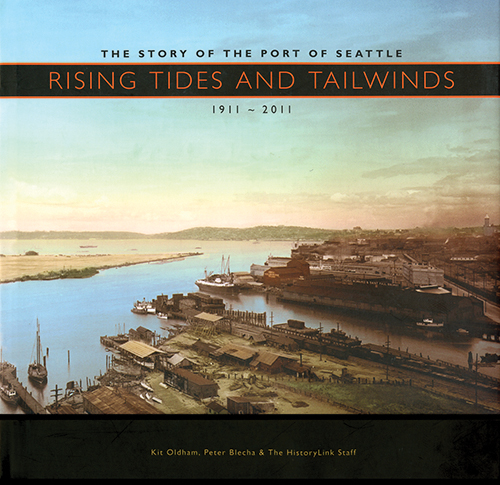 Rising Tides and Tailwinds: The Story of The Port of Seattle 1911-2011
By Kit Oldham, Peter Blecha & The HistoryLink Staff

Over the past century, the Port of Seattle has transformed the Seattle waterfront from a rickety, dirty, and dangerous collection of privately owned piers and warehouses to state-of-the-art container terminals, cruise ship facilities, an international conference center, and other harbor facilities. Read about how the Port became one of the major drivers of the regional economy. 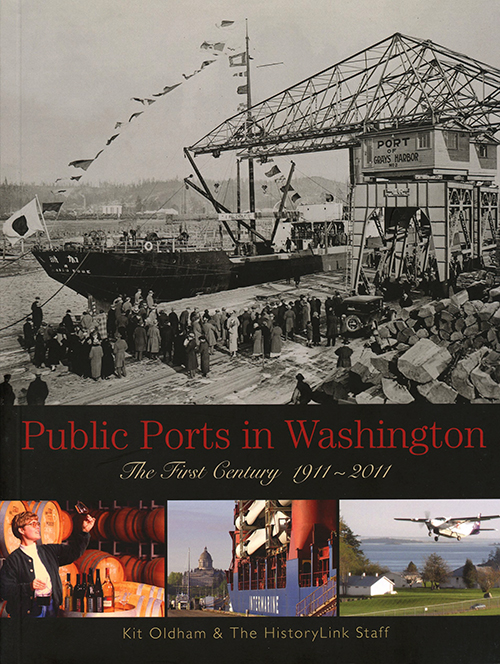 Public Ports in Washington: The First Century 1911-2011
By Kit Oldham & The HistoryLink Staff

The Washington state legislature passed the Port District Act in 1911 allowing for the first time the novel and radical idea of the creation of public ports answerable to local voters. The history of Washington’s 75 publically owned ports is captured in these pages. 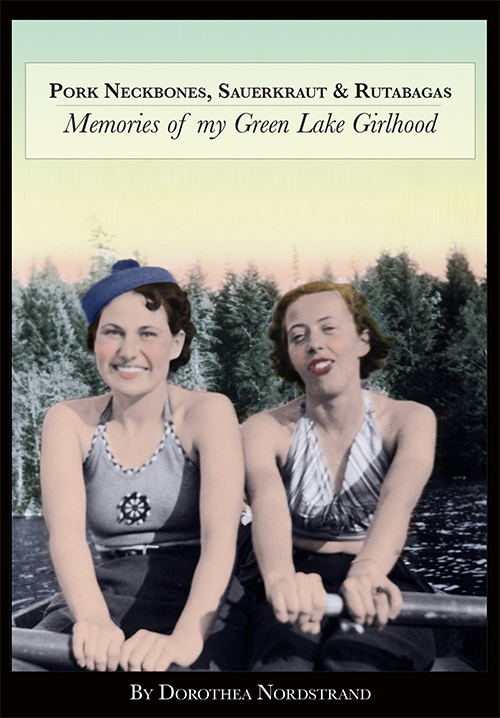 This book of memoirs is the culmination of 25 years of story writing, begun when Dorothea was 70. In this collection of stories, Dorothea has compiled humorous, heartwarming details of past times in Pend Oreille County and Seattle. 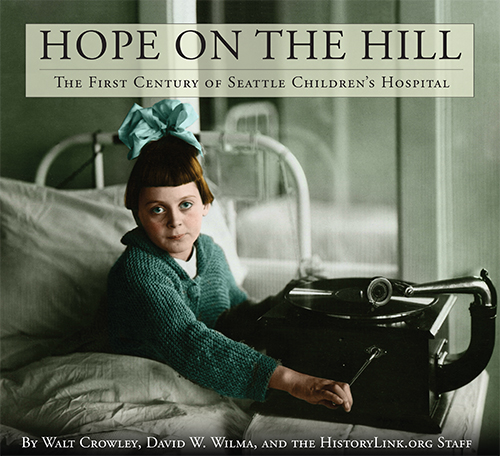 Hope on the Hill: The First Century of Seattle Children's Hospital
By Walt Crowley, David W. Wilma, and the HistoryLink Staff

A century ago a group of women started a hospital for all children regardless of ability to pay. Seattle Children’s Hospital has roots deep in the community and has been in the forefront of pediatric medicine ever since. 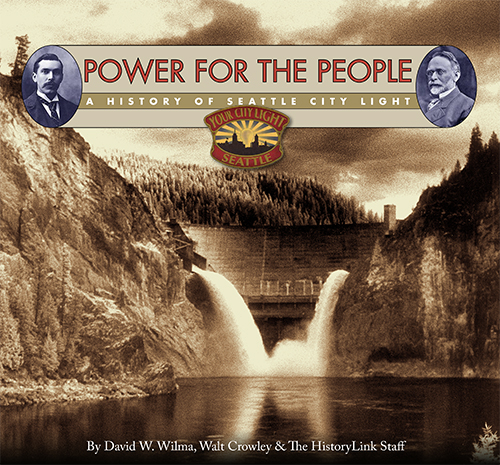 Power for the People: A History of Seattle City Light
By David W. Wilma, Walt Crowley, and the HistoryLink Staff 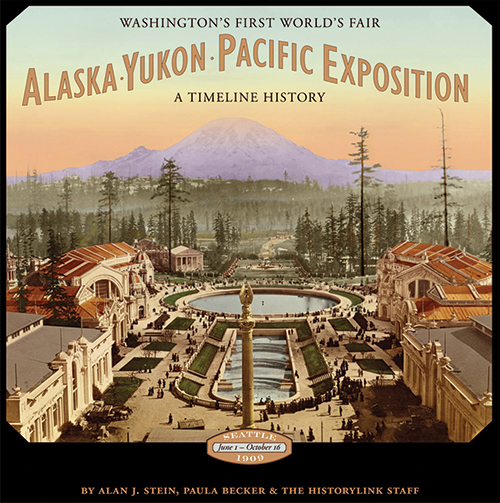 The 1909 Alaska-Yukon-Pacific Exposition drew three million visitors and put Seattle and Washington on the world stage. It left the legacy of woman suffrage and the beautiful Olmsted UW campus. 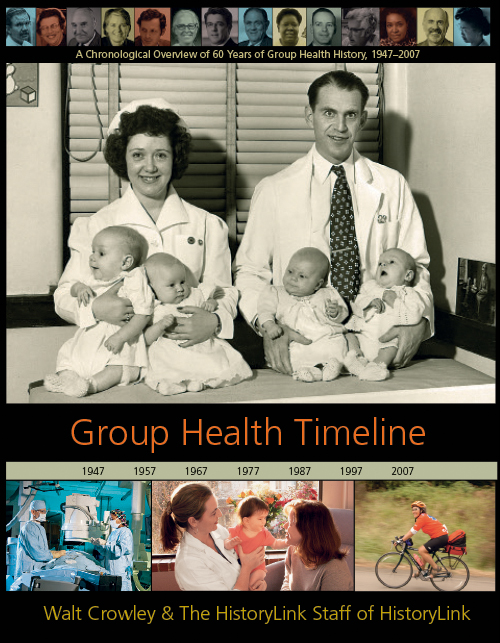 By Walt Crowley and the HistoryLink Staff

Group Health grew out of the cooperative movement in 1947. Challenging fee-for-service medicine and innovating scientific procedures on several fronts, it has been a leader in health care ever since. 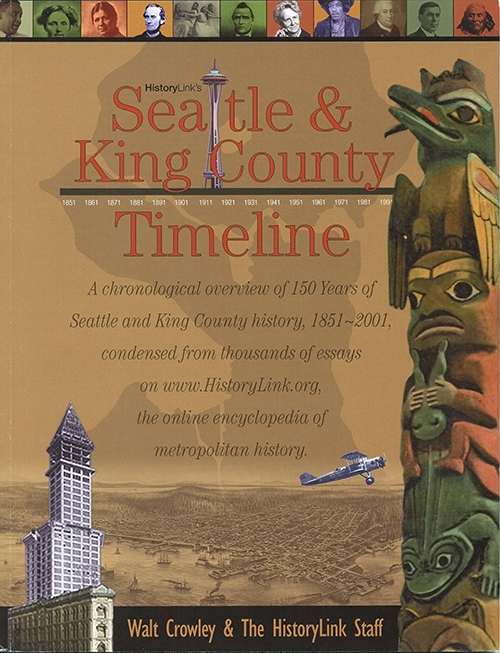 Seattle & King County Timeline: A Chronological Overview of 150 Years of Seattle and King County History, 1851-2001
By Walt Crowley and the HistoryLink.org Staff

A comprehensive overview of King County History. Lavishly illustrated, with a running timeline throughout, this is the book that set the bar for all the History Ink timeline books to follow. 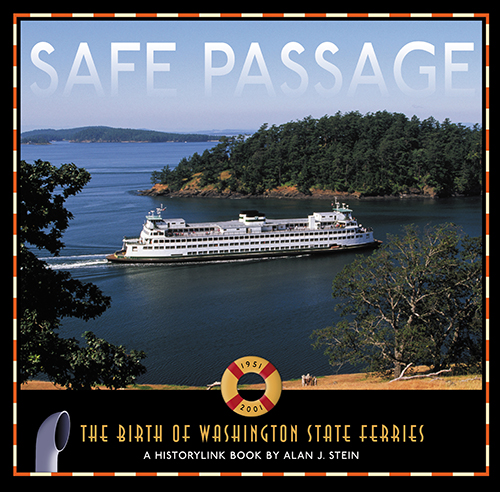 Tells the story of our treasured ferry system, beginning with the privately owned Black Ball Line, through its purchase by Washington state in 1951 up to the present. Lavishly illustrated with rare photographs. 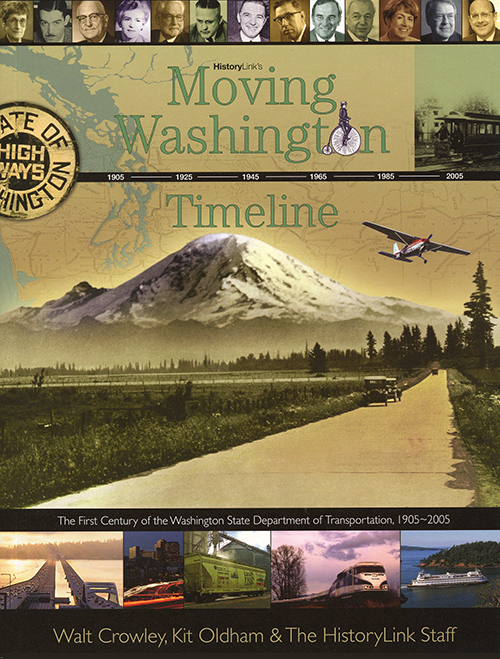 Moving Washington Timeline: The First Century of the Washington State Department of Transportation, 1905-2005
By Walt Crowley, Kit Oldham, and the HistoryLink Staff

Twentieth century people moved on canoes, horses, railroads, and finally cars on  roads. The Washington State Department of Transportation has been through it all, moving Washington into the future. 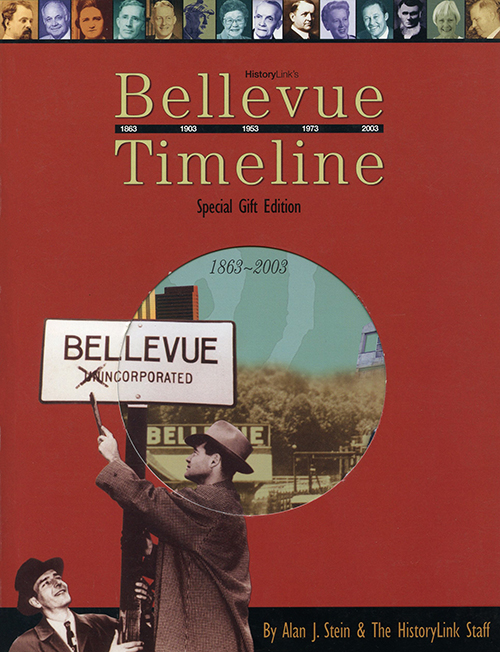 Bellevue Timeline: The Story of Washington's Leading-Edge City from Homesteads to High Rises, 1863-2003
By Alan J. Stein and the History Link Staff.

From strawberry fields to server farms, from seasonal Salish homes to suburban homes and highrises, the story of Bellevue is here. 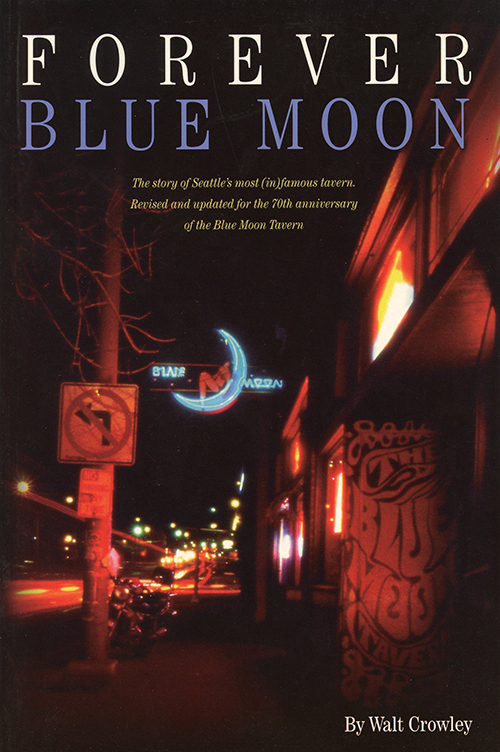 Since 1934, the Blue Moon Tavern in Seattle’s University District has been a cultural magnet, serving beer to luminaries from the world over. The stories are here, including how a group of impassioned citizens saved it from demolition in 1990. 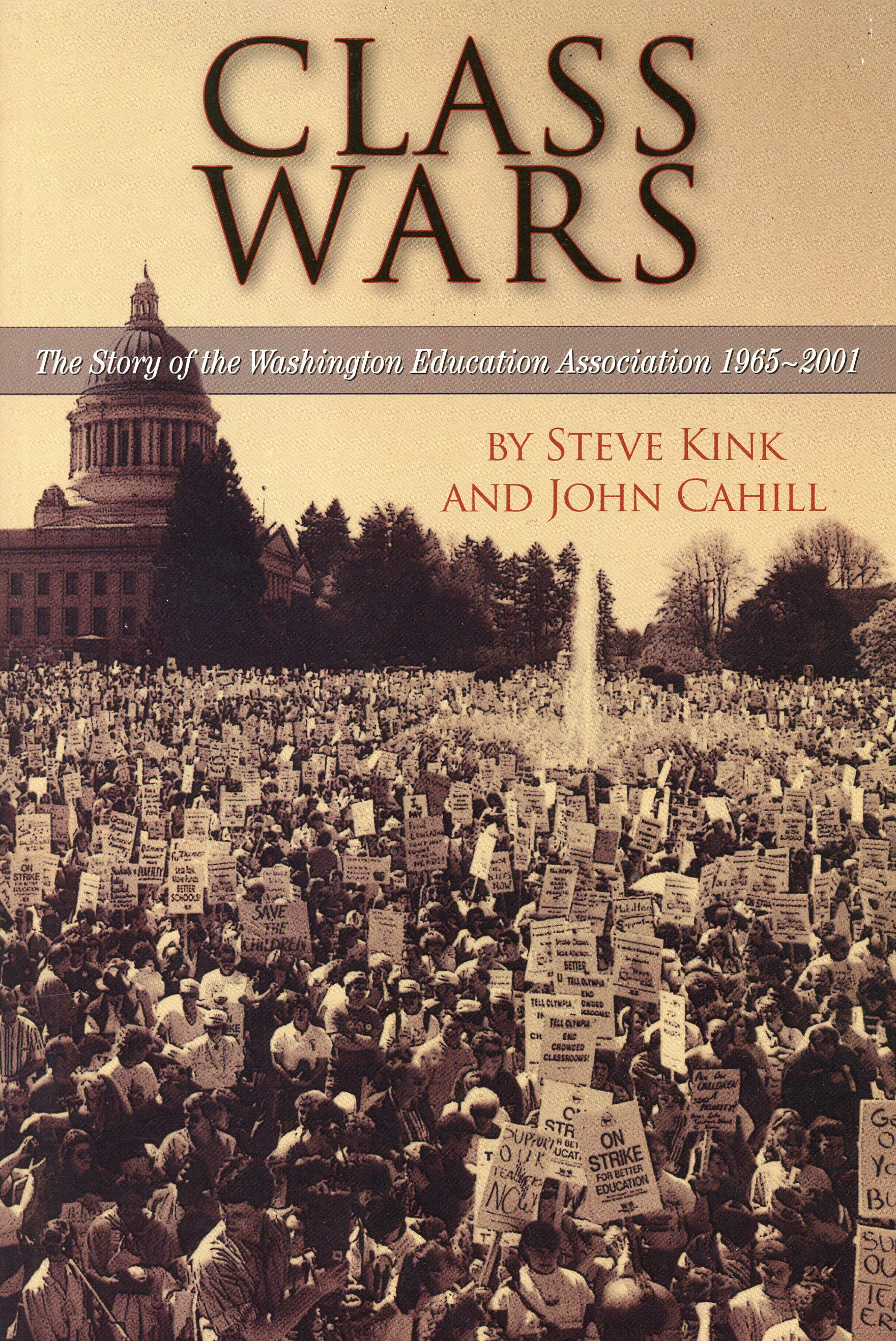 Class Wars: The Story of the Washington Education Association 1965-2001
By Steve Kink and John Cahill

The Washington Education Association transformed from a staid professional association to a powerful advocate for school children during the later half of the twentieth century. Two members tell the inside story of this radical shift in Washington’s education system 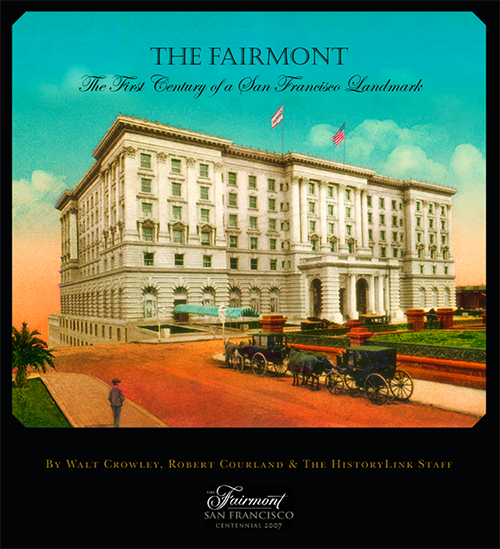 The Fairmont: The First Century of a San Francisco Landmark
By Walt Crowley, Robert Courland and the HistoryLink Staff. 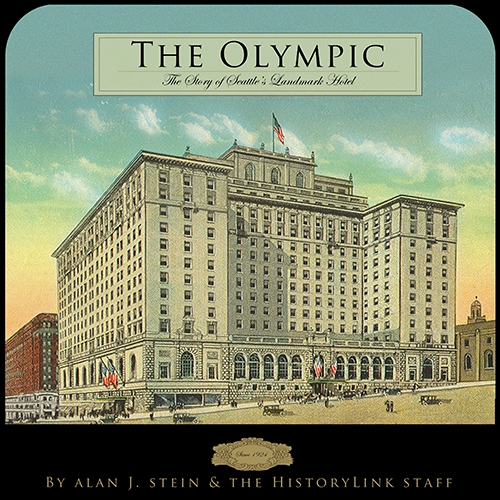 The Olympic: The Story of Seattle’s Landmark Hotel
By Alan J. Stein and the HistoryLink Staff. 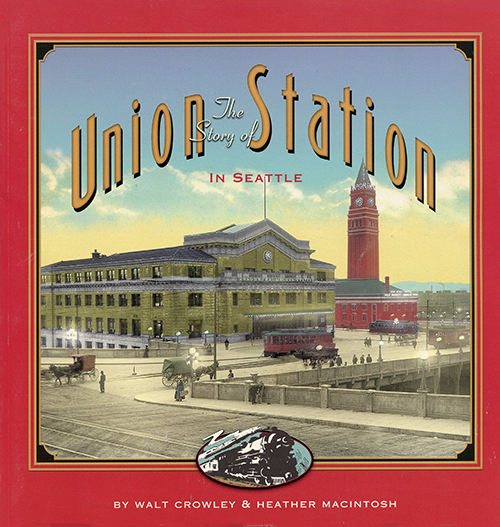 The Story of Union Station in Seattle
By Walt Crowley and Heather Macintosh. 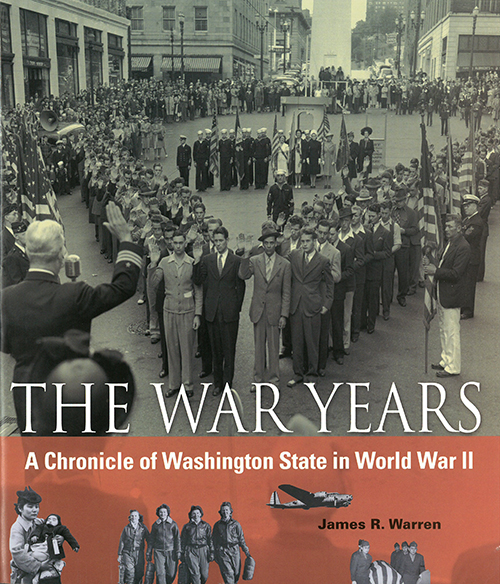 The War Years: A Chronicle of Washington State in World War II
By James R. Warren. 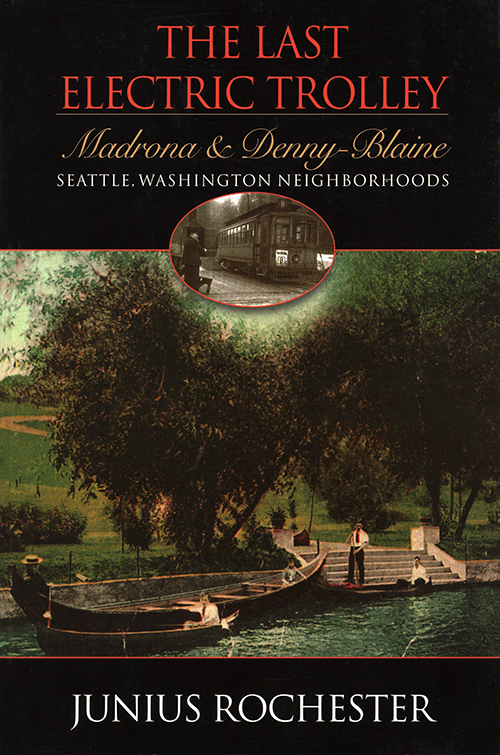 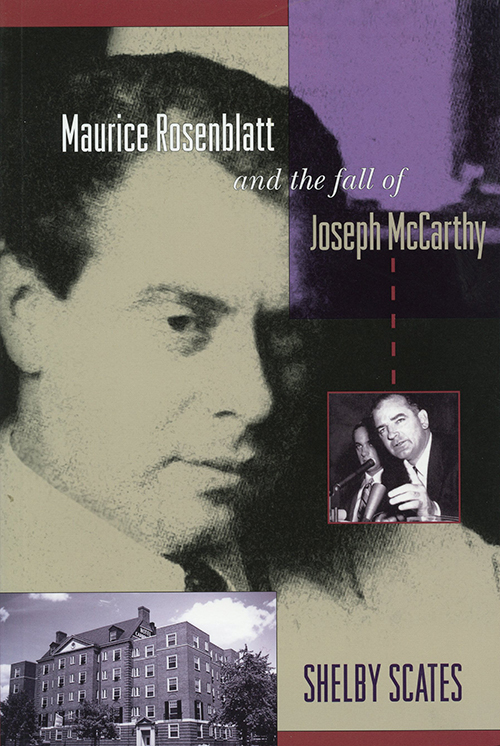 Maurice Rosenblatt and the fall of Joseph McCarthy
By Shelby Scates.