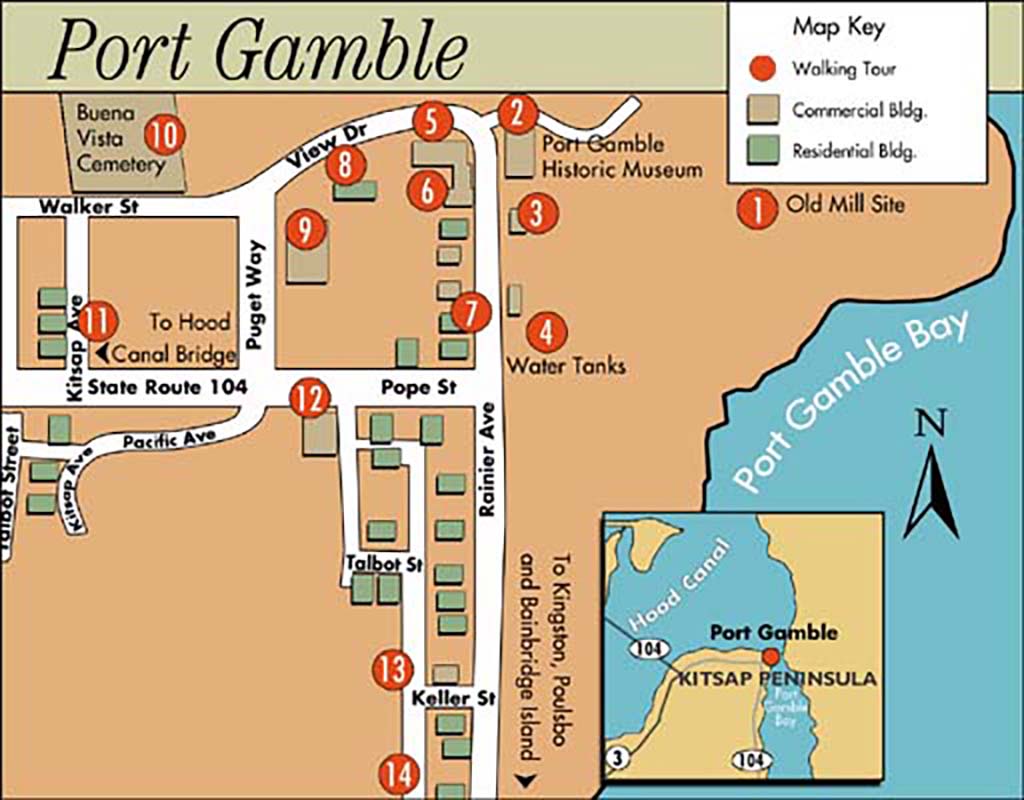 This is a tour of Kitsap Peninsula's historic Port Gamble, Washington's oldest surviving company town. It was written and curated by David Wilma, produced by Chris Goodman, and sponsored by Olympic Resource Management. The map art is by Marie McCaffrey,

The Kitsap Peninsula village of Port Gamble, located on a bay of the same name on Hood Canal, is one of the only surviving examples of a nineteenth century company town. It traces its roots back to the arrival of San Francisco timber entrepreneurs Josiah Keller, William Talbot, Andrew Pope, and Charles Foster in 1853, just months after Washington gained territorial status. Their succession of mills remained in operation until 1995, and many of the New England-style homes and stores that once served Port Gamble workers are now being restored by Olympic Property Group for residential and commercial uses bridging the nineteenth and twenty-first centuries.

The owners of the Puget Mill Co. believed that if they provided good homes and a stable community for their workers, they would profit from higher productivity. The owners of Puget Mill Co. hailed from East Machias, Maine, and they recruited many of their earliest skilled workers from there. Port Gamble grew to resemble a New England town of the era with gabled homes, a steepled church, and elm trees. Here are two shots of Rainier Avenue, the main street in 1908 and in 2003.

By the 1870s the community could boast athletic teams, a library and reading room, a dramatic club, and a school. Managers and skilled workers got the best homes and some employees built their own houses. Company houses had indoor plumbing and electricity almost as soon as those conveniences became available. Residents enjoyed the services of a medical clinic, a store, a school, a community hall, annual celebrations, even a mortuary and a cemetery.

In the 1930s, many of the smaller houses were sold and moved. Older buildings such as the schoolhouse and the Puget Hotel were demolished in subsequent decades when they could no longer be used. Through the end of the twentieth century, Port Gamble continued to function as a company town, providing homes to sawmill workers, a store, and other community services.

In 1995, the sawmill closed, but Port Gamble did not. Pope Resources still owns the town and property and Olympic Property Group rents the commercial buildings and residences. Port Gamble has become a tourist attraction and a destination for special events and ceremonies.